Late Ms. Lucy is one of the young Nigerians that died on March 15, 2015 in Port Harcourt, River State.

The Nigerian Immigration Services failed to make proper and  adequate provisions for the protection of lives of these Nigerians and in consequence, over 19 of these Nigerians were killed in a stampede in various stadia across Nigeria including Abuja, the Federal Capital Territory.

She has been buried in her hometown.

May her gentle soul rest in perfect peace. Amen! 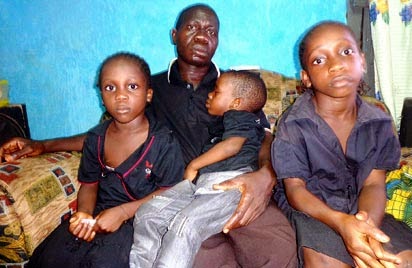 Mrs Sandra Amun together with her husband, Austin Amun from Uzebba, Owan West Local Government Council of Edo State, participated in the Nigerian Immigration Service recruitment exercise held on March 15, 2014 at the Samuel Ogbemudia Stadium Benin City. No thanks to the stampede resulting from the shoddy crowd control and handling of the recruitment exercise, Sandra died, leaving behind three young children.

She graduated in HND banking and finance seven years ago. Her most senior child, a girl, Favour,  is six years, Miracle, the second,  is five  and the last, Favour (male), is three years.